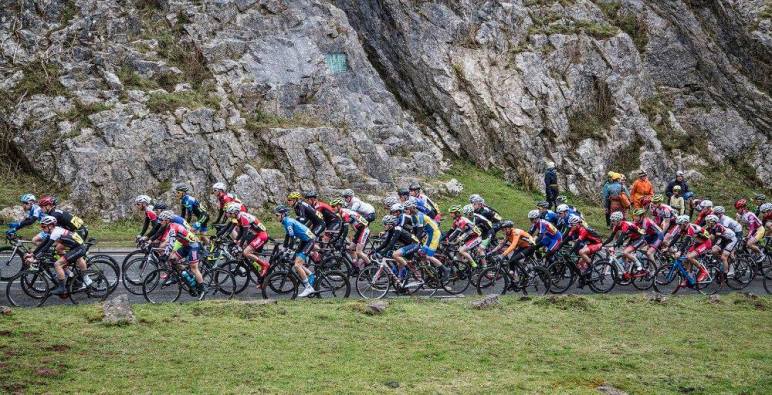 Last weekend was the second round of the junior national series, so Max and I packed up our stuff and headed to the Mendips.

It was a two stage race with a rolling/flat first day and a hilly second day.  This was one event that I had been looking forward to for a while, due to it’s hilly profile, and thought I that I could perform relatively well.  It turned out that it wasn’t going to be the hills that determined mine or Max’s performance.

Having signed on, and received my oversized numbers that wrapped around any normal sized waist like a belt, I warmed up on a time trial bike on a turbo.  Usually I would either ride around by the start or go on the rollers for a bit at the start of a road race, because a warm up isn’t quite as essential as it is in a time trial.  I’ve heard some riders actually decline an offer to come for a warm up claiming they race better without one.  I decided to do a proper warm up like I would do for a 10M TT as once the race was de-neutralised there was immediately a 3.5km hill up Burrington Combe.  Whoever was first at the top of the hill would wear the KOM jersey on the second day.

My dad was doing a TT in Derby so gave a bag of my things to Max’s dad, before telling me “obviously you should wear short fingered gloves”.

We set off from the HQ in cold sunshine and headed, neutralised, towards the start.  At the bottom of the hill there was a crash so the race remained neutralised until way up the climb, when these people had re-joined the group.  This was unfortunate as I was hoping for the race to split apart up this climb, but the climb was too short for this.  I failed to place as well as I hoped at the top of the climb having let myself get blocked in.

After the top of the climb we were to race 7 laps of a rolling circuit.  One guy went off the front on his own, then another, then I went with one other, and this group of 4 started working, half a lap later a more reasonably sized group bridged and 10 of us were working well, going hard, and building up quite a lead.

Meanwhile back in the group someone had gone down in front of Max wiping him out. This meant the end of Max’s weekend.  I have to say I was pretty gutted for him as the course for the day really suited him, and with me out front, he could have sat in and got a good finish if it all came back together.  Thankfully he didn’t have any lasting injuries, and the damage to his hanger and wheels were soon patched up a Cyclesense.

Whilst Max was taken back to his hotel I was sitting happy in a strong group and a 1min 40second gap back to the group.  Then it started to rain.  The temperature started to plummet, as did the gap back to the group.  It started to hail, and having being tricked into short fingered gloves I could no longer feel my hands.  In fact my hands were too cold to squeeze a bottle into my mouth.  At this point I really knew that I’d blown it.  I couldn’t last another two and a half laps with no nutrition.  At this point the much strung out group overtook us, and I had bonked.  Having being spat out the back pretty quickly the ambulance came past me and told me that I could pull out with two to go and still start the next day.  I bowed out with two laps to go and climbed into somebody’s van and just wept.  It was the coldest, most painful situation I had ever been in. I couldn’t have cared less about the race.

The next day I sat in my hotel for 25mins quite pretentiously pinning my number on, to avoid the previous days parachutes.

A block headwind up the first climb of the day meant the group really stayed together, before a break went on the flatter section.  I didn’t go with the break as I thought that it would probably come back together on the long slight downhill to the next climb, and I was scared to repeat the previous day’s performance.

After the descent, on which the break was not reeled in, my poor positioning had me too far back going into the left hand turn up the second climb.  As the group turned left onto the thin road of the second climb too many people had gone into it in too big a gear.  This meant serious problems for the pathetic descenders, who were caught behind the serious congestion.

Many splinters at the top of the second climb re-joined each other but the breakaway was still gone.  On the final climb I came into it well placed in my group and was near the front.  However, perhaps paying for the previous days efforts finished a few down in that group.  I came 26th on that stage, but a 20min time penalty on the first day meant that my GC result was nowhere.

I learned two major lessons last weekend.  Firstly that nobody has ever been so hot in April that they have to withdraw from a race.  Long-fingered gloves and a second base layer would have gone a long way.  And secondly is a lesson I seem to learn after every other race.  I desperately need to improve my group positioning.