It has been 5 years since I last rode this epic race, and even then, I didn’t finish the course having suffered a puncture with about 10 miles to go so there was a bit of unfinished business. The year previous I had ridden and managed a half decent time of 2:02:13 albeit I was still relatively new to time trialling back then. Personally I would class anything under 2 hours on this course as very good, given the amount of climbing and unrelenting nature of the course.

I had been checking the weather forecast all week and each day the forecast got worse to the extent that on Saturday morning I had decided I wouldn’t ride because of the snow that had been forecast for the morning. I didn’t want a wasted journey. A check on the weather later that evening showed an improvement in the forecast so I made the final decision to ride, whatever the weather.

Sunday arrived and my alarm clock didn’t even need to go off – I was awoken at 4.30am by my little 8 month old daughter. I got the car packed, tried to eat some cereal (I hate eating at that time of the day) and set off at 6am from a gloomy Huddersfield. I arrived at Barnard Castle at approx. 8am and it was absolutely freezing! I was beginning to have second thoughts and I began to rehearse excuses in my head as to why I couldn’t start the race… I soon snapped out of it and told myself that I hadn’t driven all that way for nothing.

I duly signed on and collected my number. I decided I’d wear as much clothing as possible (I really suffer in the cold) and opted for a fairly thick baselayer, some compression socks, some compression quad guards, overshoes and 2 pairs of gloves! I’d also opted to ride the full TT set up, so Scott Plasma, disc wheel and Zipp 404. In hindsight I would probably have ridden my Scott Foil with clip on bars because the Plasma without wheels weighs in at almost 10kg. My gearing of 56/39 – 11-25 was also a bit optimistic! But hey, all in for the win as they say. I had a quick spin on the turbo trainer and before I knew it, it was 9.25 and I had 5 minutes to get to the start.

Rather than do a reconnaissance of the course in my car beforehand, I had tried to memorise it from my last visit but I genuinely don’t remember it being as hilly as it is! The first few hundred meters are downhill and then your begin climbing for what feels like the next 30 miles! I kept looking down at my Garmin and the average speed was barely above 19mph. This was going to be a long morning of suffering. At 7.5 miles you take a sharp right hander to start the very steep climb of Carlolin which peaks at about 13% and goes on for ¾ of a mile. I dropped it into the small ring and twiddled away until I reached the top. The next 6 miles or so are a mix of fast sweeping descents followed by steady 6% climbs, although the head wind made this feel twice as steep at times. Having had a big crash in the winter my descending skills are fairly crap and I peppered the brakes far more than I should have done. That said, there were several hairy moment when the odd gust of wind caught my disc wheel and I genuinely had a few poo in the pants moments. 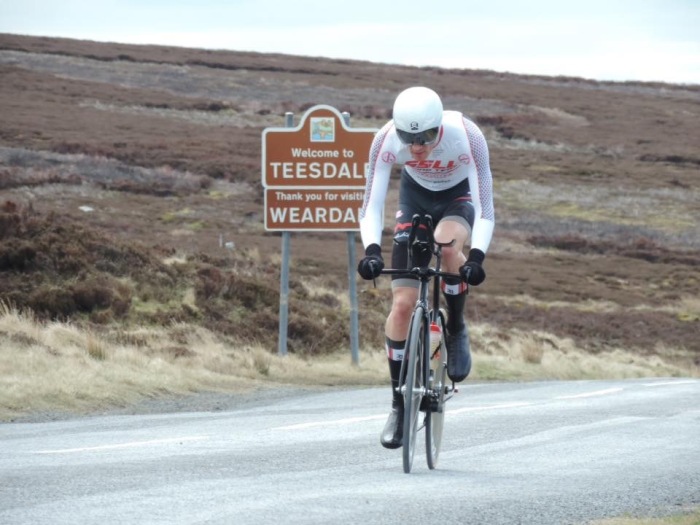 The first big test of the day was the descent, yes descent, of Unthank Bank. It’s about 20% gradient and you approach this at speed (or not much speed if you are a wuss like me). There are marshals waving their flags to warn you of the approach. My brakes were screeching so much that I thought they were going to set on fire! After successfully negotiating the descent you then do a short 5.5 mile loop before retracing your steps. It was at this point that my chain had decided it didn’t want to engage in the 11 sprocket (once home I had dissected the issue as a loose cassette lockring) but given my fairly big gear it wasn’t too much of an issue until the supersonic last 10 miles home. My average speed to this point was approaching 20mph having done about 3000 feet of climbing already.

The next big test is the ascent of Unthank Bank. It’s steep. Really f*****g steep! I grovelled my way up it, puffing and panting and just wanting the pain to end! It goes on, and on and on a bit more before levelling off and then climbing steadily before the next fast descent. My legs were really beginning to suffer at this point but I managed to keep the cramp at bay (thanks to the quad and calf guards). The penultimate suffering of the day is the long climb back up Bollihope Common, which peaks at 1700 feet. I did this in the big ring but in hindsight should have twiddled away in a smaller gear but alas I never learn. I was counting down the miles to the summit before the super-fast descent back to the finish. At this point my average speed had dropped to 18.7mph and I was fairly convinced I had a job on to even do a sub 2 hour ride. Little did I know just how fast those last 10 miles were going to be and I really could have done with the 11 sprocket!

The miles were ticking by at speed and the average had at last climbed above 20mph. The last test of the day is a short 10% climb over Folly Top which is really not welcome at that point in the race with the lactic acid literally coming out of my eyes. I wept in pain over the climb, cursing the gradient, before engaging top gear and it was now flat out to the finish! The finish is on a slight uphill but with the following tailwind the speed didn’t drop and I crossed the line in 1:54:40.

A brief visit to HQ and I was the early leader, having even beaten Jon Sturman (very classy roadie) and Mark Donovan (reigning National Junior Cyclocross Champion). I had to dash off home but later found out I had been comprehensively beaten by Carl Donaldson who equalled the course record in a stunning time of 1:48:48. I finished 4th overall and whilst I certainly didn’t expect to win I equally didn’t expect to have been well and truly stuffed. However, on reflection, given the training limitations I now have I am actually pretty pleased with how things went. It was only my 4th race of the season and I think I am still finding my legs. Next year, with a lighter bike and hopefully some more training time, I hope to go a bit quicker.

Many thanks to Teasdale CRC and Bob Murdoch for hosting the event. It is genuinely the hardest event on the calendar but also the best organised. I tried to thank every marshal I went past although with the state I was in I could barely muster a word to some of them. But thank you. Standing out in such cold conditions can’t have been fun.

Stats for the race:

Today I am a broken man. Legs well and truly buggered.