Andy Jackson reports on a BIG weekend of races…

Last weekend, when discussing races for the up coming week, my coach, Bob Tobin said, “…are you really going to race the VTTA 10 in Hull on Saturday afternoon, then the RealTeam ’25’ in South Wales to following morning?!” – of course I was!

I was coming off the back of a disappointing race for me the previous weekend in Saturday started with a trip to the renowned fast V718 course for the VTTA 10m TT.  Stiff competition, as always on there, with Team mates Jon Surtees & Joel Wainman as well as Keith Murray of Drag2Zero…  “After a well below performance at last weeks Sleaford 25 which neither I or my coach could really put our finger on why I approached Saturday with some nerves as to how the hell the legs would be!

After reviewing photo’s from last weekend I decided my ‘Saturday shopper’ position had to finally, once and for all go… So mid week, after many swear words, thrown tools and sweating buckets in my sauna (*sorry flat!) I finally followed the ‘crowd’ and went for ‘ski bend’ extensions…

I test rode Friday, legs were awful, #standard, but the position felt quick … I could tell from KOM’s – one I’d been chasing a while…

I pushed off and was determined to start steady – 450NP after 2mins – that was out the window!!!  I did settle in and came off the turn at half way bang on 9mins… now a ’17’ looked on,  the run back was not quite as fast as I hoped.  I actually prefer some wind – you know where you are,  there seemed air resistance anywhere and expecting a super fast return, I was disappointed… At about 8m, just under 15mins I realised the ’17’ was not on, and honestly lost my head a bit… but i quickly got back on to finish at near on 45mph and 18:11… NOT BAD!  my 2nd fastest ever ’10’ and what I hoped was good enough for the Vets 40+ record, but alas no, Jeff Jones stunning 18:09 is safe.  For now.

Then it was time for a super quick change, jump in the motor for a 230m trip to South Wales ready for the RealTeam 25m on the renowned fast R25/3 course…

A lovely day meant no traffic, so i arrived jut after 7pm to my B&B and settled in for the TDF and a HUGE Tesco banquet ahead of race day #2… I think my eyes were bigger than my belly & the Malibu & Coke – don’t ask! 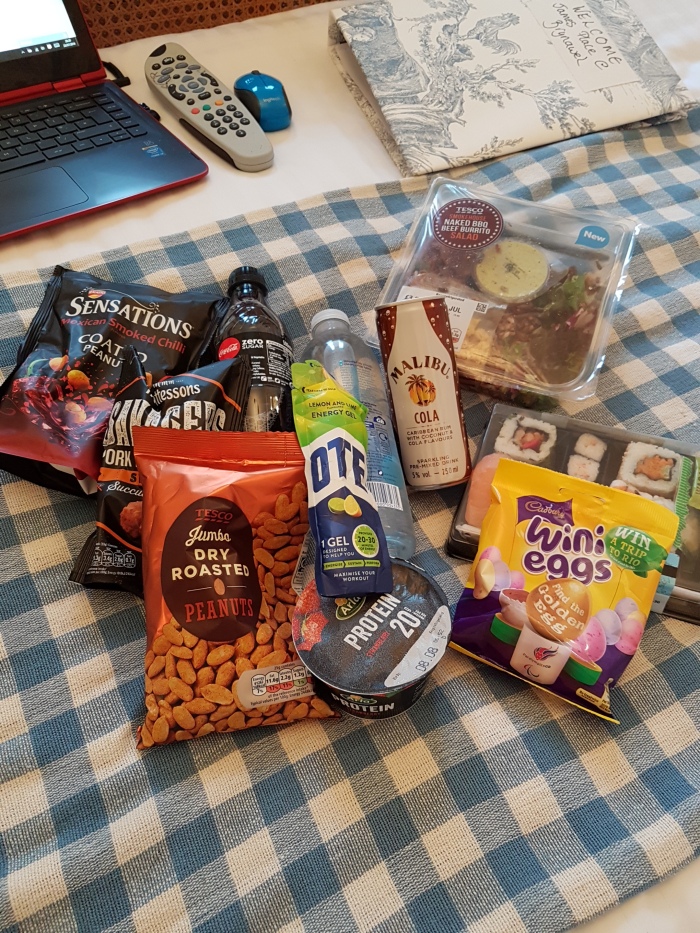 As is typical for me I did not sleep well in a great little B&B in Merthyr Tydfil – too many stimulants I think!

I woke 8’ish to torrential rain – pretty standard this season I am afraid!

I took a leisurely run up to the HQ, signed on a sat in the car watching the rain for an hour or so!  I was lucky enough to bump into James Gullen – by far favourite today who was looking to have a go at Matt Bottrill’s Course (and previous National) record.

For me a good warm up saw me arrive 3mins before start time and ready to go… I flew off down the hill and gingerly eased round the first 2 roundabouts – 2 ‘offs’ in the last month have made me nervous cornering in the wet!  Onto the fast DCand down the ‘mountain’ – God its so fast…I peaked at 49.9moh down the hill – scary if you think about it, better if you don’t!  The only option was to micro interval down the hill.  I hit 6m in 10min and continued to hold a great pace.  it seemed ‘sucky’, there was no wind so it was just air resistance – to be honest I prefer proper wind, at least you get help one way!  I was baulked at the first round about, but not hugely and flew to the turn, hitting 15m in 26min. the turn – WHAT AN IDIOT!  I have ridden this course once, driven it twice so HOW did I get it wrong??!!  I managed to go round the long lazy curve off the DC to the first min roundabout, where its a sharp left, over the DC then back for the 10m return leg… so WHY oh WHY did I go straight on and almost back onto the south bound carriageway?!  I managed to catch it, dead stop and jump up the curb.. to re-start in 58×14 – not easy!  ON analysis I lost 10 secs V my last event (also in the rain).  I was LIVID and hammered the first couple of miles, way over threshold.. then settled.  a ‘good ride’ was still possible…. that last 6m or so was HARD an accumulation of yesterday’s race, loads of driving and the nagging air resistance.