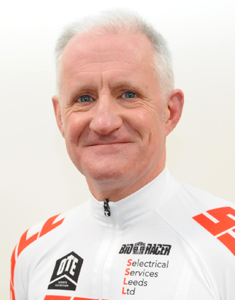 Originally from York, Jon has been racing for 35 years, starting with the Clifton Cycling Club and the Knaresborough -Dunlopillo Racing Team, gaining a name across the UK as a talented Junior finishing in the Top 10 of the National Junior Best All Rounder and also won the Yorkshire Championships.

As a member of the RAF, he has been a dominant force since 2003 in UK Military and civilian events, winning the 10 mile and 25 mile championships and military BBAR with a record breaking average speed. In 2014 after a long time trying, he became the fastest military cyclist in history over 10 miles, taking 36 seconds off the previous record which stood for over 20 yrs. in 2015, he lowered the record by a further 4 seconds to record 18:38 which is also a national age record for 48-50 yr olds.

2016 Targets: Dominate the Time Trial scene in Yorkshire, the Midlands and project the new team sponsors nationally. Ride the Tour of Cambridgeshire UCI World Amateur TT qualifier with a view of then qualifying for the Amateur World Championship and become World Champion for the 49-50 yr old category. Ride the 2016 Duo Normand UCI Cat 1 TTT.